With the advent of May Day, many people have begun to plan their travel routes and methods for the three-day holiday. According to a tune on the Internet... 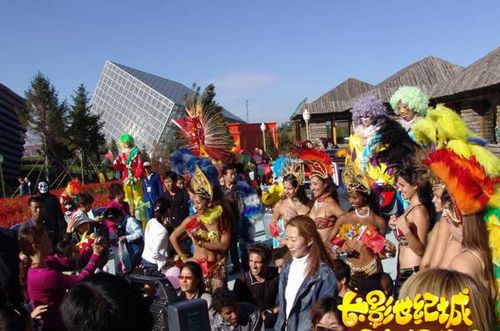 With the advent of May Day, many citizens have begun to plan their travel routes and methods for the three-day holiday. According to a survey on the Internet, people's travel plans have become quite rational with the changes in consumption structure and travel philosophy. Short-distance travel and self-driving travel in the near future are most popular among the public. Due to its geographical relationship, Changying Century City has become the first choice for travellers in the North and a classic route for self-driving tour. On May 1st (April 30th - May 2nd), Changying Century City set off a magical wave. Not only did the magic masters help out, but also had a close contact with tourists, and there were even more magical journeys waiting for tourists to reveal.

Short-distance self-driving is the most favored

"Now there are only three days of holidays on May 1st. Long-term travel time is not enough. Since the May Day holiday, it is better to choose a place closer to home." I believe many people have the same idea. The shortening of the May Day holiday, the citizens have chosen the tourist route that is closer. "It doesn't matter where you go. The key is to get out of your usual busy life and let the tired body get a rest, so that you can better invest in the next stage of work." Short-distance travel or self-driving tour, not only can not be travel agency Time constraints, but also can save a lot of money. Wherever I want to go, I really have fun. Avoiding the peak of the Golden Week, you don't have to rush on the road with the big team. This is two important reasons why short-distance travel is popular.

The visual shock brought by "Avatar" brought the world film and television industry into the special effects era, and the image technology came to the fore. The film theme park with the theme of image technology took the fire. The Long Shadow Century City, which brings together the world's top special effects technology, has become the most eye-catching theme park. With high-tech content, high novelty, high production level and high national cultural characteristics, Changying Century City focuses on the light and shadow effects produced by the most advanced film technology and the unique charm that makes people feel powerful. The park brings together the most advanced special effects movies in the world. Visitors can experience Aladdin's magical magic carpet and open the magical flight journey in the battle of the stars. In the water curtain city, explore the secrets of Jinlu and experience the classical and beautiful Alexander Palace...

During the May Day holiday, Long Shadow Century City created a magical magic feast for tourists. From April 30th to May 2nd, 500 lucky visitors were randomly selected daily to give evidence of entering the magic world for free - "Golden Mask" . Last year, Liu Qianâ€™s performance at the 5th Anniversary of Changying Century City will still be remembered. On May 1st, Changying Century City invited a number of well-known magicians. The amazing close-up magic will run through the whole event. The magical wave is on the verge.

Visitors can drive along the Jingha Expressway and continue to travel 5 km after arriving at the Misha Service Area. Follow the signs to the â€œNet Moon â€“ Shuangyangâ€ direction. After the expressway exits the expressway, follow the Jingyue Street. It takes 8.5 km to reach Long Shadow Century City.

At the "Shenyang-Wangjiazhuang" highway intersection, take the Beijing-Harbin Expressway and drive toward Changchun. After arriving at the Changchun Expressway, continue for 7 km. After exiting the expressway at Jingyue, drive 8.5 km to Shuangyang to reach Changying Century City.